Motoshi Kosako Bio
Born in Matsuyama City, Japan,  he started his musical training on the piano then the guitar. While in university in Tokyo he played the acoustic and electric guitar in professional Jazz bands and the Swing Journal magazine described him as “one of the most remarkable young Jazz musicians.”

In 1997, Mr. Kosako moved to the United States,  soon after he started playing the harp. He is primarily self- taught with a few lessons to learn fundamental harp technique.  He was the principal harpist of Stockton Symphony Orchestra in California between 2005-2010 and the featured soloist for 2009-2010 season for Mozart’s harp concerto.
In 2007 he won the second place in Lyon & Healy International Jazz & Pop Harp Competition performing his own composition and received the “Best of Sacramento” award from Sacramento Magazine as “Best Jazz Hound in Tie and Tail”.   He plays numerous original compositions for TV commercials, TV programs, films, applications (apps), as well as performing both improvised and written music live with actors, and presentations,  as solo and various ensemble formats including amazing jazz musicians such as Paul McCandless (oboe, English horn, soprano sax, bass clarinet), Michael Manring (fretless electric bass), Bill Douglass(bass). In 2008 he began touring Japan,  giving performances and various workshops.  He is considered one of the most influential Jazz harpist both in the U.S. and Japan.

In 2008, he joined NPO holistic health research group in Japan (Total Health Research Group) and began conducting research projects involving sound healing and practical application of music to occupational fields for the promotion of health. In 2012 the  public medicine professional journal, “Science of Public health” in Japan published his research article “Total Health and Music”. He holds a B.S of health science and nursing from Tokyo University, and is a registered nurse and public health nurse.
He and his wife Terra are developing 15 acres property to a sustainable farm by using Permaculture method. They enjoy produce from organic garden and own live stocks such as goat, pig and chicken. 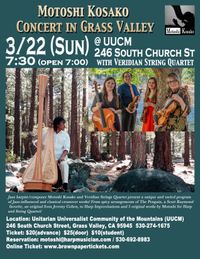 Jazz harpist / composer Motoshi Kosako and Veridian Strings Quartet present a unique and varied program of Jazz-influenced and classical crossover works! From spicy arrangements of The Penguin, a Scott Raymond favorite, an original from Jeremy Cohen, to Harp Improvisations and 5 original works by Motoshi for Harp and String Quartet!